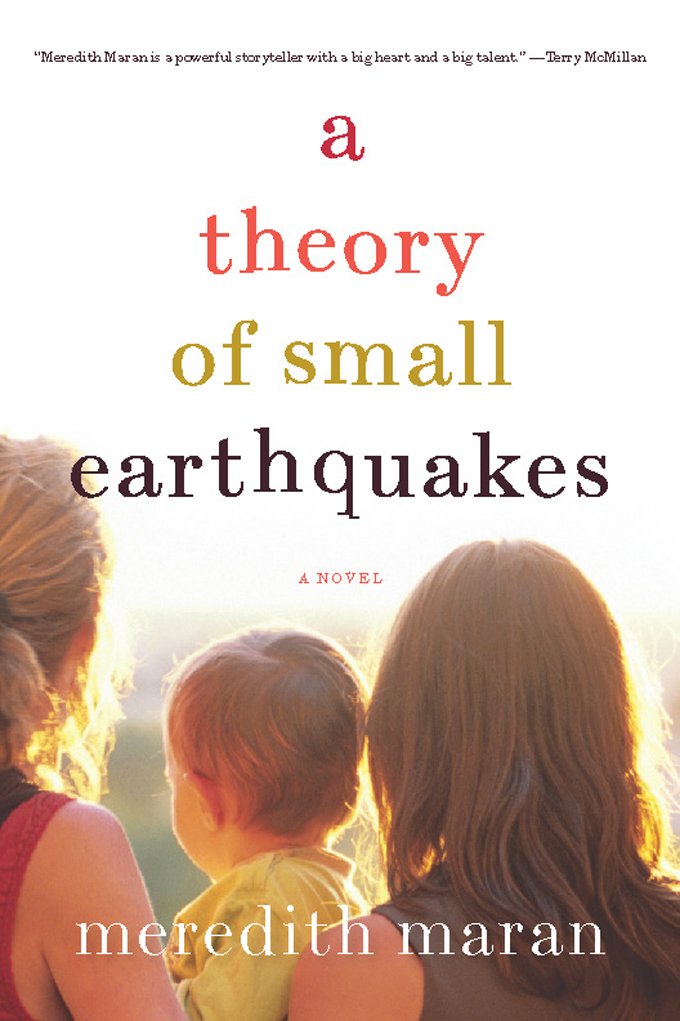 In her ten previous nonfiction books, Meredith Maran has trained her journalistic eye on the subtle dance between the political and the personal. Now Maran brings her provocative gaze to her debut novel – a family story spanning two decades, set against the social, political, and geological upheavals of the Bay Area. Eager to escape her damaging past and chart her own future, Alison Rose is drawn to Zoe, a free-spirited artist who offers emotional stability and a love outside the norm. After many happy years together, the 1989 Loma Prieta earthquake deepens fissures in the two women’s relationship, and Alison leaves Zoe for a new, “normal” life with a man. Alison’s son is the outcome of both of these complicated relationships, and the three parents strive to create a life together that will test the boundaries of love and family in changing times.

“Maran explores the vagaries of love and the true nature of family in this debut novel, the story of a Bay Area woman who leaves her longtime partner for a “normal” life with a man.”
—People Magazine, March 5, 2012

“This intriguing, timely yarn gracefully brings up a number of provocative topical issues, most importantly the changing dynamics of what it means to be a family…Maran lets this intimate, personal story play out in its own time, without pat ending or tidy wrap-up…Considering the recent ruling in California, moving the controversy of same-sex marriage closer to the Supreme Court, Maran’s novel effectively reminds us that this possible seismic social shift is really less a “hot topic’’ than a question of deeply human needs.”
—The Boston Globe, February 16, 2012

“A Theory of Small Earthquakes” has much in common with [Eugenides’] “The Marriage Plot,” but ultimately has more to say…Maran brings her trademark humor and insight to her fiction, crafting a tale that brings a human, and very loving, face to the public debate over gay marriage and what makes a family.”
—The San Francisco Chronicle Book Review, February 12, 2012

“Meredith Maran’s 11th book is her first novel…it’s the kind of book I like to read, with compelling characters and a twisty plot and a deep examination of what it means to love.”
—Curve Magazine, July/August 2012

“A THEORY OF SMALL EARTHQUAKES by Meredith Maran is a fictional parenting story that challenges assumptions.”
—Reader’s Digest, February 2012

“Meredith Maran’s wonderful new novel…is not only an important and honest book, but it is also extremely funny and smart. A must read.”
—AfterEllen.com, June 2012

“Maran starts this eminently readable novel at the peak of the feminist movement in the 1970s…The book is set in the Bay Area, with lots of familiar landmarks, and the seismic events of the title paralleling the emotional earthquakes endured by the characters.”
—San Jose Mercury-News, March 3, 2012

“Set in the Bay Area, this debut novel follows the ups and downs of protagonist Alison, who struggles to raise a son, sustain her marriage, and manage her longing for a female lover.”
—San Diego Magazine, April 2012

“Call it Two Women, One Man and a Baby. Maran’s take on the modern family is at once unexpected and totally relatable.”
—Ladies’ Home Journal, March 2012

“Captivating from the first line…More than just a story of passion and the fragility of first love, A Theory of Small Earthquakes is an illustration of the complex world we live in, the risks we take to satisfy our desires and the delicate balance between loving wildly and letting go.”
—Los Angeles Review of Books, June 2012

“For a novel released on Valentine’s Day, “A Theory of Small Earthquakes” is several magnitudes of order more complicated than your grocery-store Valentine’s card. Is it a love story? Sure, but it’s a thorny, messy, ambiguous love story centered on three people with overlapping currents of sexuality, parenthood and commitment creating a vortex designed to reflect how people really live today in a changing family environment.”
—Santa Cruz Sentinel, February 23, 2012

“Spectacular…a tremendously fascinating reflection on the many different forms a family can take. I was moved, and truly fulfilled, by this story…I don’t find this to be a “gay” novel, just a tremendously well-written one.”
—It’s Either Sadness or Euphoria

“A fun trip down memory lane [that] raises a lot of questions about sexuality and identity. A Theory of Small Earthquakes takes one small group of people, shakes them up and lets them settle as best they can. Like life, it’s not perfect, but ultimately it seems to work out for everybody.”
—Bay Area Reporter, 2.16.12

“This book succeeds at invoking a tangible sense of the depth and vastness of a mother’s love for her child…the challenges [the characters] face in the late twentieth and early twenty-first century are fully formed and strikingly familiar.”
—Publishers Weekly, Feb. 20, 2012

“Maran, who has set several of her 10 non-fiction books in Berkeley, clearly loves the city, quirks and all, and her affection comes through in passage after passage.”
—Berkeleyside, 2.15.12

“I adored this book from the very beginning. The end leaves you with a cliff-hanger that practically begs for more. The story that Mrs. Maran spins is one we all can relate with regardless of the specifics. Maran writes from her heart.”
—The Self-Discovery Files

“This novel is very readable, with strong and interesting characters and a good balance of a compelling story and the addressing of social issues.”
—StephanieVandrickReads, July 6, 2012

Q&A with editor Oscar Villalon in the literary magazine ZYZZYVA

Frances Dinkelspiel on the Berkeley history in the novel on Berkeleyside

EXCERPT
Read an excerpt in The Monthly

“Meredith Maran’s wonderful new novel, A Theory of Small Earthquakes, is what Franzen’s Freedom would be, if it were free.”—Rebecca Walker

“Meredith Maran is a powerful storyteller with a big heart and a big talent.” —Terry McMillan, author of Waiting to Exhale and How Stella Got Her Groove Back

“A love story that had me in tears at the end. Maran has written a thoughtful, moving, honest novel that is simultaneously personal and political.” —Kate Christensen, author of The Astral and The Great Man

“Meredith Maran’s dazzling debut is a provocative, funny, and deeply moving look at the ties that bind—and sometimes strangle—and the ways we struggle for the love we yearn for. I adored this novel.” —Caroline Leavitt, author of Pictures of You

“Funny, lively, political, personal, nostalgic, touching, A Theory of Small Earthquakes deftly chronicles love and its various meanings. I enjoyed it greatly.” —Meg Wolitzer, author of The Uncoupling and The Ten-Year Nap

“A smart, sexy, funny, wrenching, delicious story of lust and trust and love and family.” —Anne Lamott, author of Imperfect Birds and Bird by Bird

“A Theory Of Small Earthquakes teaches us something new about love and sex, jealousy and loyalty, and also, and perhaps most importantly, motherhood. Meredith Maran’s first novel is a powerful debut that left me waiting impatiently for her second.” —Ayelet Waldman, author of Red Hook Road and Bad Mother

“In this groundbreaking novel, Meredith Maran has told a story few writers have explored: of a woman drawn to two lovers, and of the unlikely family she creates with two extraordinarily different partners, each of whom speaks to a different aspect of her desire. Maran asks us to consider whether sexuality can be defined by preference for one gender or the other, or if it is shifting and sometimes stormy as the tides.” —Joyce Maynard, author of The Good Daughters and At Home in the World