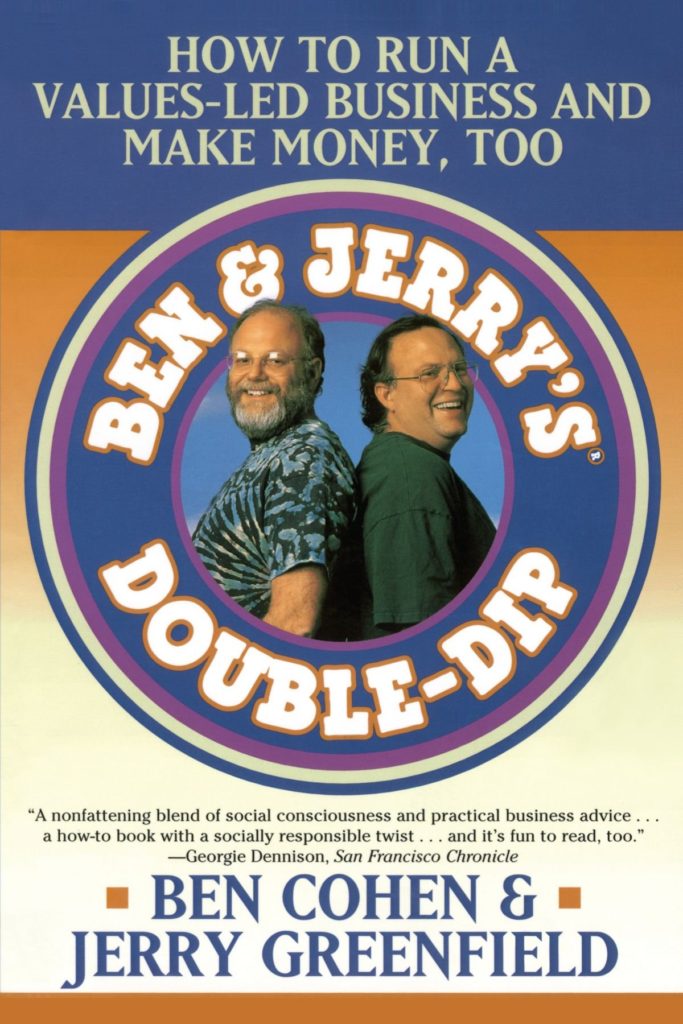 “If It’s Not Fun, Why Do It?” “Business Has A Responsibility To Give Back To The Community”

To Ben Cohen and Jerry Greenfield-better known as Ben & Jerry-these slogans are more than bumper stickers. They represent a philosophy of business, a way of life, a raison d’etre. From the day they founded Ben & Jerry’s in 1978, through the twists and turns of building what is now a $160 million company doing business in many countries, Ben & Jerry have been as committed to turning business into a tool for social change as they’ve been to turning premium ingredients into great ice cream.

In Double Dip, Ben and Jerry recount-with the irreverent humor and unfettered imagination that brought us such memorable flavors as ‘Cherry Garcia,’ ‘Wavy Gravy,’ and ‘Chubby Hubby’-many of their funniest, most successful, and least traditional marketing schemes. In 1982 there was the coast-to-coast ‘Two Real Guys’ Scoop-A-Thon, which ended when the Scoopmobile (their funkily converted RV) blew up outside Cincinnati, making it the world’s biggest Baked Alaska. In 1981, when Pillsbury-owned Haagen-Dazs tried to force Ben & Jerry’s out of distribution, their David vs. Goliath-inspired “What’s the Doughboy Afraid Of?” campaign successfully mobilized an army of Ben & Jerry’s customers to keep their favorite ice cream in the freezers. When they needed money to build a new plant in 1983, Ben and Jerry eschewed conventional methods of raising capital; instead, they held a $126-a-share, Vermont -only public stock offering, which put the ownership of the company in the hands of the ‘little people’ of Ben & Jerry’s home state.

With its seemingly wacky antics, controversial social and political stands, and iconoclastic corporate policies, the company that’s come to embody ‘socially responsible business’ has drawn the skepticism of business analysts, the criticism of media cynics, and the amazement -and ultimately, the respect-of the business world and the people in it.

As Ben and Jerry explain in Double Dip, they haven’t always known exactly what they were doing, but they’ve always known why they were doing it. There’s a method to their madness; that method is what they call “values-led business.” Double Dip explains what values-led business is (and isn’t), why it’s the most viable model for business today, and how anyone who owns, works for, invests in, or shops with a company can help make that entity part of the solution instead of part of the problem.

Unlike their imitators, Ben Cohen and Jerry Greenfield are ‘two real guys’ who built a unique, successful company around strong social values and an unfailing sense of humor. Ben and Jerry are never realer, funnier, or more convincing than they are in the pages of Double Dip.

“A very different kind of business book, Double Dip shows how a company can win the respect of its community, loyalty of its customers, and healthy profits, too, by addressing social concerns as well as the bottom line.”
-Business Times

I love Ben & Jerry because they are an inspiration to any business that recognizes a worldwide responsibility. They understand that decisions affect not just economics but people too.
-Anita Roddick, Founder, The Body Shop

This book really is a double-dip. First these two guys flatter our taste with their flavors, and now they show us how they do that with their insouciant values-based leadership. This story is not only the story of two smart entrepreneurs, it’s also the story of why America works.
-Warren Bennis, Professor of Business Administration, USC