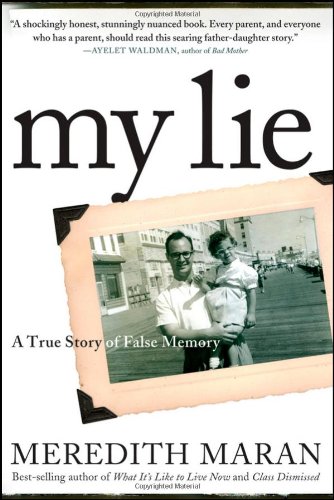 Meredith Maran lived a daughter’s nightmare. At age 37, she accused her father of sexual abuse. Eight years later she realized, nearly too late, that he was innocent.

Maran wasn’t alone. During the 1980’s and 1990’s, a sex-abuse panic spread across the country, beginning with the infamous McMartin preschool trial. Tens of thousands of Americans became convinced that they’d repressed memories of childhood sexual abuse, and then recovered those memories in therapy. Hundreds were falsely accused. Families were destroyed.

MY LIE is the story of this modern-day witch-hunt as it played out in one woman’s life and family. It’s also a tightly wound psychological, cultural, and neuroscientific portrait of a shameful time in recent American history.

Midwest Book Review, January 2010
Meredith Maran’s experience with false memory is important on several levels: it traces her own divided life and it also closely examines the phenomenon of false memory.

Minneapolis Star Tribune, December 5, 2010
The author’s punch prose style is far from boring…”My Lie” proves that a little misapplied civilian knowledge of psychology can be a dangerous thing.

Open Salon, October 19, 2010
Maran was actually in the courtroom, reporting on trials like [Gary] Ramona’s. She was also given access to therapeutic sessions with perpetrators of incest… Call it group-think or mass hysteria or witch-hunting, we are all vulnerable to its reach.

TIME.com, October 18, 2010
Mind Reading is TIME Healthland’s new series of talks with authors of “brainy” books.  Meredith Maran, a California journalist and author, has told her story of falsely accusing her father of molesting her in a compelling new book bluntly titled My Lie.

The Wall Street Journal, October 16, 2010
Ms. Maran, who recanted her accusation a decade later, does not go easy on herself in “My Lie”… [She] concludes here that her lie…was no different from the belief of some people that President Barack Obama is a Muslim or that Saddam Hussein possessed weapons of mass destruction.

Sophie Nicholls, UK: October 11, 2010
What is extremely helpful about Meredith Maran’s account of her false memory is her courage and honesty in tracing how the false narrative developed inside her own mind and how she came to believe it in the first place. I think it’s essential reading for any therapist and particularly for clinical hypnotherapists.

The Week: October 8, 2010
Maran provides a fascinating account of how feminists like herself worked collectively to expose child sex abuse—only to themselves become caught up in the “mass hysteria” they’d triggered.”

People Magazine, October 4, 2010
In 1988 journalist Meredith Maran accused her father of having molested her…Eight years later she realized it wasn’t true. In My Lie Maran, 59 (who has reviewed books for PEOPLE), explains why she thought she’d been abused, how she decided she was wrong, and what happened when she apologized.

San Francisco Chronicle Book Review: “Top Shelf Book” October 3, 2010
During the ’80s and ’90s thousands of people claimed they’d repressed memories of childhood sexual abuse – and Maran was one of them. This is a frank, honest narrative.

False Memory Syndrome Foundation Newsletter, October 2010
[Maran] is especially credible because she spent so many years working in the child abuse prevention area…[MY LIE] is a good read. It’s hard to put down… Readers may not agree with all of [Maran’s] opinions, but that in no way diminishes the value of this book…a great tool for families.

National Center for Reason and Justice, October 2010
It’s about time someone such as Meredith Maran wrote a book like this. I urge anyone interested in late 20th century culture, gender conflicts, social influence, and human suggestibility to read My Lie.

NPR: The Takeaway, September 30, 2010
This book is a bitter, persuasive, compelling critique of media and psychology… a blockbuster, mind-blowing story.

Macleans Magazine (Canada): September 30, 2010
Maran is an engaging storyteller, at her best exploring how she reconfigured her memories to justify the allegation…My Lie provides an eye-opening exposé of how the 20th century’s Salem witch trials came to be.

San Francisco Chronicle Book Review: “Recommended Book” September 26, 2010
With candor and humor, Maran, an Oakland journalist, re-examines the “recovered memory” phenomenon of the 1980s and ’90s – and her own shocking involvement in it.

The Rumpus, September 27, 2010
[Maran’s] new book My Lie: A True Story of False Memory is a raw and self-revealing account of the events of those years and the outcomes for her family and herself.

The Washington Post, Sunday, September 26, 2010
One of the more bizarre stories of the 1980s and ’90s was the…one Meredith Maran writes about in “My Lie”: accusations of incest against family members, in this case her father…Fortunately, Maran explains, “When I came to my senses, my father was still alive and relatively well. I still had time to make amends.”

Boston Globe, 9/21/10
In this terrifying, haunting, and controversial memoir, award-winning journalist Meredith Maran delves into the fascinating subject of the recovered memory movement… Her refusal to whitewash her own behavior, her fierce ability to expose all sides of the issue, and her compassion for the abused as well as those still falsely imprisoned as abusers opens up a dialogue about memory, belief, and past- and present-day culture that is as riveting as it is important.

Salon.com, Excerpt and Q&A, September 20, 2010
More than 20 years ago, Meredith Maran falsely accused her father of molestation. That she came to believe such a thing was possible reveals what can happen when personal turmoil meets a powerful social movement.

Jezebel, 9/20/10
Now that recovered memory has been widely questioned, and Maran and others have recanted, what can we take from their experiences?…Maybe the best thing we can learn from the “mass panic” Maran writes about is that children need to be protected while they’re still children, so they never have to have memories of abuse, repressed or otherwise.

Berkeleyside, 9/20/10
Maran’s tenth book may prove to be her most provocative – and controversial. My Lie: A True Story of False Memory is a searingly honest and remarkable memoir.

San Francisco Chronicle Book Review, Sunday, September 19, 2010
Maran’s story is so tension-filled that I want to keep some of the twists out of this review, allowing readers of this remarkable book to discover them apart from me…Maran is so hard on herself…yet it is that very self-criticism that provides so much of the narrative’s raw emotional power.

Marie Claire, What We’re Reading, September 2010
Maran is one of the tens of thousands of Americans who, in the ’80s and ’90s, became convinced that they’d repressed memories of childhood sexual abuse, and when she realizes her memories were false, she has to pick up the pieces of this life-destroying mistake. Ayelet Waldman says: “My Lie is a shockingly honest, stunningly nuanced book. Every parent, and everyone who has a parent, should read this searing father-daughter story.” That pretty much sums it up.

More Magazine, Great Reads, September 2010
This telling book chronicles a time in which the nation looked at domestic life through “incest-colored glasses.”